Clostridium difficile–associated diarrhea (CDAD) is the leading cause of nosocomial diarrhea. In 2011, there were 453,000 new CDAD episodes resulting in 29,000 deaths in the U.S.  Fidaxomicin is an antibacterial drug indicated for treatment of CDAD. Compared with vancomycin, it has a comparable clinical response and superior sustained clinical response, defined as clinical response at the end of treatment, and survival without proven or suspected CDAD recurrence through 25 days beyond the end of treatment. We present a model to evaluate the budget impact of fidaxomicin compared with vancomycin patients with CDAD in the U.S.

Based on the decision-analytic model, fidaxomicin has the potential to be cost-saving from a hospital payer perspective. 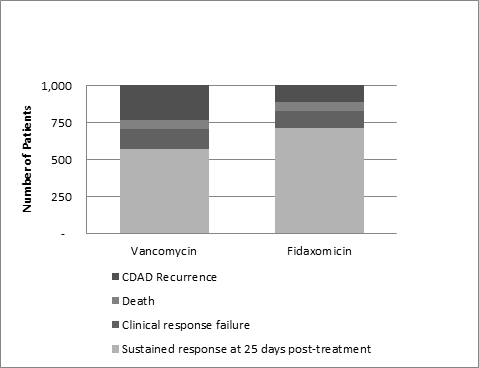