Purpose: People frequently make choices that are at odds with their stated values. This study tested whether interactive, dynamic online values clarification exercises that explicitly showed 1) tradeoffs inherent in a decision and 2) fit between expressed values and possible options could help people make treatment choices more in line with their stated values.

Method: We conducted a between-subjects online randomized experiment in a demographically diverse population (n=2033, 46% male, 82% white, age range 18-68, 57% no college degree.) We first asked participants: if they had to choose, would they rather die or have a colostomy? Participants were then asked to imagine that they had been diagnosed with colon cancer and faced a choice between two surgeries differing only in that one had a 4% chance of colostomy while the other had a 4% additional chance of death. Participants in the control group proceeded immediately to the surgery choice; other participants interacted with one of four versions of a values clarification exercise. All four versions had two sliders, one labeled, "avoiding colostomy," the other, "avoiding death." Participants moved the sliders to express how much they valued each outcome. Exercises showed tradeoffs, fit, both, or neither. To show tradeoffs, as the participant moved one of the two sliders, the other slider automatically moved equally in the opposite direction. Without this constraint, each slider moved independently of the other. To show fit, we presented two dynamic vertical bars modeling a simple linear relationship between the surgeries and the participant's slider settings. As the user moved the sliders, the vertical bars moved in relation to the sliders. The relationship between sliders and vertical bars was emphasized by matching color cues. (See figure.)

Result: Consistent with our prior research, in the control arm, 22% of people made surgery choices that were discordant with their previously stated values. After interacting with a values clarification exercise that showed neither tradeoffs nor fit, discordance was 23%. Showing tradeoffs reduced discordance to 17%, showing fit reduced it to 18%, and showing both together lowered discordance to 14% (Chi-squared (4) = 13.90, p = .003).

Conclusion: Explicitly showing the tradeoffs inherent in a decision and the fit between values and options can help people make choices more in line with their stated values. 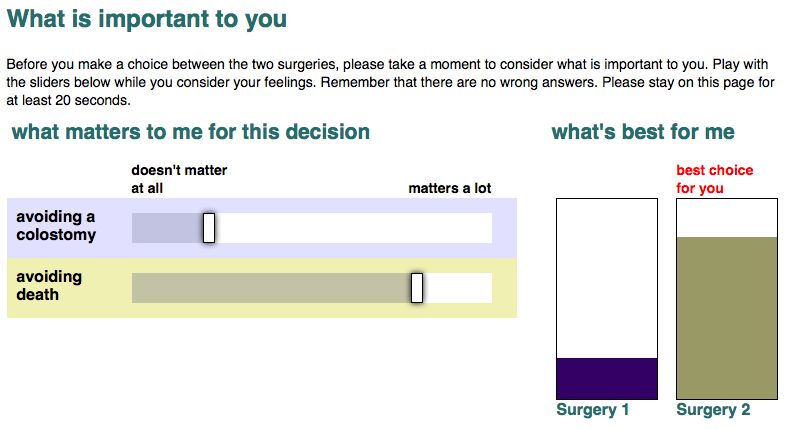 See more of: The 34th Annual Meeting of the Society for Medical Decision Making