Grand Ballroom A (Hyatt Regency St. Louis at the Arch)

Purpose: To understand how adults in the United States differ with respect to their comprehension of, as well as their needs and preferences for, emerging information about prescription drug safety.

Methods: Using a large Internet panel, we conducted a randomized study (FDA grant #U18FD004608-03) to examine comprehension and other measures of effectiveness of drug safety messages that emerge in a post-market surveillance phase.  A total of 1,244 panel members participated in the survey.  Half of the sample was randomized to receive an existing FDA Drug Safety Communication (DSC) with the drug name fictionalized while the other half received the same safety information revised using best practices in health literacy, plain language and clear communication.  Strategies included simplifying the reading level of the DSC by using shorter sentences and words with fewer syllables; using format and design modifications such as additional subheadings and more white space; and adding numeric information geared toward lay audiences.  We examined how these modifications to the way drug risk information is communicated impacts comprehension, message clarity, and behavioral intentions.

Results: When seeking information about prescription drugs, 80% of respondents reported that they looked for information about possible side effects; 70% for dosage information; 63% for safety information (see Figure 1).  Based on a five-item comprehension index, those who received the revised version of the message had significantly greater comprehension of the information relative to the standard version (62% versus 52% correct).  In a multivariate model, greater comprehension was associated with being White, having no health insurance, and greater trust in the information.  Lower comprehension was associated with higher risk perceptions for heart or blood vessel disease.  82% of those who received the Revised version agreed that the message was clear compared with 73% who received the Standard version.  A consumer's health literacy level was a key factor in respondents' level of understanding of the information.  No significant differences between groups were found on any of the behavioral intentions measures including the likelihood of talking to their doctor.

Conclusions :  Communicators should seek to reduce cognitive burden by presenting drug safety messages with a modest amount of information, key points that can be easily identified, an organized layout, and numerical information with adequate context. 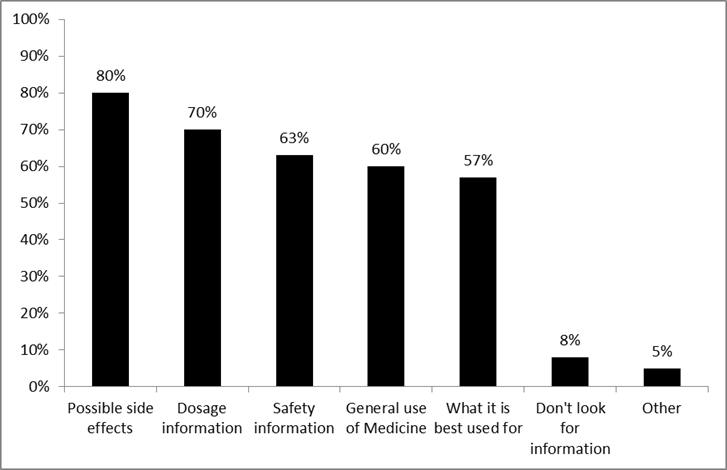 Methods: Participants (N=4,833) completed an online survey experiment in which they were presented with a hypothetical scenario where they received hemoglobin A1c test results from a blood draw done between clinical visits for management of Type 2 diabetes. Test results were randomly presented in one of three line graph formats: (1) solid, single-color that only showed the standard range, (2) color gradient utilizing a stoplight color theme (green to red) to indicate risk categories or (3) solid-color blocks that indicated discrete risk categories utilizing the stoplight color theme. The A1c test value was also randomized, being within the standard range (5.4%) or one of three higher levels (6.4%, 7.1%, or 8.4%). Our primary outcome measures were 1) how good or bad the participant thought their test result was for their health, with “don’t know” as a response option and 2) graph preferences. Individual difference measures included subjective and objective numeracy, and graphical literacy.

Method:  Relevant studies were located by searching MEDLINE, Embase, CINAHL and CENTRAL databases. The review focused on studies that tested multimedia DAs in adults faced with preference-sensitive decisions, and reported quality of decision-making outcomes, such as knowledge or decisional conflict scores. A thematic analysis was conducted to identify multimedia features and sub-classes. A meta-analysis was conducted based on standardized mean differences (SMDs) for improvements in quality of decision-making scores. Subgroup analyses compared pooled SMDs for DAs that incorporated a specific feature to other computer-based DAs that did not incorporate the feature to assess whether specific multimedia features were associated with improvements in quality of decision-making.

Method:   Rheumatoid arthritis (RA) patients were presented, via mail survey, with a hypothetical decision scenario where they were asked to consider adding EnbrelTM (etanercept) to their current regimen. To prepare for the decision, each patient was randomized to review either an etanercept specific long, 24 page PtDA (LONG DA) or a short, 2 page PtDA (SHORT DA).   Each subject was evaluated for: their decision to intensify therapy, strength of preference of decision, pre and post intervention knowledge, and decisional conflict (DCS).

Result:   Equal number of patients were allocated to each intervention. The response rate was 52% with 266 participants.  With formative evaluation of the PtDA, there was no difference in patient rating of: having information needed, being well organized, and being helpful in making a decision.  123 (14.6%) of patients who reviewed the LONG DA and 143 (14.0%) of who reviewed the SHORT DA chose to take etanercept (χ2=.023; NS). There was no significant difference between intervention groups in mean strength of preference to intensify therapy.  Those who were randomized to the SHORT DA vs LONG DA had a greater increase in post-intervention etanercept related knowledge that 15.5% vs 10.5% (P< .02).   There was no difference between interventions in: overall decisional conflict (DCS), nor informed, values clarity, uncertainty, or effective decision subscales. However, subjects who reviewed the SHORT DA had significantly higher score on the DCS support subscale (P< .04).

In this randomized clinical trial of decision support, a brief PtDA was not inferior to a traditional long format PtDA.  Rather there is evidence of increased knowledge gain and feeling more supported to make a decision to intensify therapy.  Brief PtDA are acceptable to patients and can effectively support patients preparing for complex medication decisions.   Implementing simple decision supports at the point of care deserves further evaluation.


THE IMPACT OF THE “ILLUSION OF EXPLANATORY DEPTH” ON HEALTH-RELATED DECISION MAKING PREFERENCES
Aaron M. Scherer, PhD, University of Michigan, Ann Arbor, MI, Laura D. Scherer, PhD, University of Missouri, Columbia, MO and Angela Fagerlin, PhD, VA Ann Arbor Healthcare System & University of Michigan, Ann Arbor, MI
Purpose: As patients are encouraged to become more involved in their healthcare decisions they may be confronted with how little they actually know about the decision options. People often think they have a relatively good understanding of how something works, a phenomenon known as the “illusion of explanatory depth”, an illusion that is disrupted when people are forced to try to explain how it actually works (see Rosenblit & Keil, Cogn Sci,2002). Whether people exhibit the illusion of explanatory depth for medical interventions and the impact of disrupting this illusion on interest in using or being involved in decisions about using those interventions is unknown.

Conclusion: Giving people a practice decision in a less threatening context may help them feel more confident in their abilities to make medical decisions that reflect what matters to them. 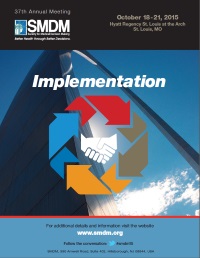