Purpose: Despite India's rapid economic development, it still has the world's largest number of active tuberculosis (TB) cases and hundreds of millions of people living in poverty. Assessments of TB control programs have primarily focused on health gains; yet, returns to such programs may be underestimated without also considering the relationship between TB and impoverishment. We developed, calibrated, and validated a model to consider the health and economic effects of TB in India.

Methods: We extended our prior dynamic transmission microsimulation of TB in India, stratifying it by socioeconomic status (SES), represented as real per-capita consumption expenditure. We parameterized SES in the model using the Indian National Sample Survey (1994-2012; n=5,548,989). The model captures relevant dynamics including: 1) secular economic growth (average improvement in real per-capita consumption expenditure over time) and shifts in the SES distribution; 2) TB transmission dynamics within and between members of SES groups; and 3) SES-specific risks of latent TB activation. We calibrated the model to overall demographic trends; WHO-reported TB trends (1996-2013); and age-, urban/rural- and SES-specific TB prevalence estimates from India's National Family and Health Survey-3 (NFHS-3). We validate the longer term impact of TB on SES using longitudinal data from the Indian Human Development Survey (IHDS) (2004/2005, 2011/2012; n=215,754).

Results: In addition to overall demographic trends, the model calibrates well to TB prevalence trends, and SES-specific TB prevalence in multiple subpopulations (Figure 1, Panels A-C). Figure 1 shows that while overall TB prevalence has declined, among the poorest group, it remains 2.5 times higher than in the wealthiest. While TB prevalence is generally higher in older ages, among the poorest of any age group, it is >3 times higher than similarly aged wealthy individuals. The model validates against longitudinal impacts of TB on SES. For example, both the model and IHDS data show that for individuals in the wealthiest SES groups, having TB in 2004 nearly doubles the chance of being in the poor SES group in 2011.

Conclusions: Our dynamic microsimulation captures relationships between TB and SES in India and strongly suggests that TB control could deliver substantial economic value beyond its direct health effects, an important consideration for future model-based economic evaluations of such programs.

Inequality in health outcomes in relation to Americans' socioeconomic status (SES) is rising, despite recent evidence that the life expectancy gap between black and white Americans may be decreasing1,2. Cardiovascular disease, still the leading cause of death for Americans, merits study with respect to the socioeconomic spectrum. The objectives of our study were: i) to evaluate the relationship between neighborhood-level SES and major atherosclerotic cardiovascular disease (ASCVD)-related events (myocardial infarction, stroke, and cardiovascular death); and ii) to evaluate the relative extent to which neighborhood SES and physiological risk explain neighborhood-level variation in ASCVD event rates.

Rates of major ASCVD events in low-SES communities were over three times that of high-SES communities, and neighborhood SES explained over four times the amount of neighborhood-level variation in event rates than the established ASCVD risk model. The incremental explained variation attributable to the physiological variable-based PCERM – beyond the explained variation from neighborhood SES – was small. SES needs to be incorporated into risk-based decision-making procedures for primary prevention of ASCVD.

Results: Without performance-based payment (i.e, current payment), tPA versus no tPA had incremental cost-effectiveness ratios of: $14,300/QALY in the 0-3 hour treatment window; $27,100/QALY in the 3-4.5 hour window; and was dominated in the 4.5-6 hour window. Compared to current payment, equivalent population-level NMB was achieved in P4P scenarios with 10 minute door-to-needle time reductions (6,392 more AIS cases/year in the 0-3 hour window) incentivized by increasing tPA payment by as much as: 10.5% for 0-4.5 hours; 12% for 0-3 hours and 6% for 3-4.5 hours; or 13.75% for 0-3 hours only. Population-level NMB differences between current and P4P payment scenarios depended on the sizes of performance improvements and payment incentives (Figure).

Conclusions: Determining the optimal size of financial incentives used in P4P is an important challenge facing policy developers who seek to improve the value of healthcare delivered in the U.S. Value-based AIS payment adjustments can be set using CEA and a NMB framework that could be generalized to other quality measures across health conditions. 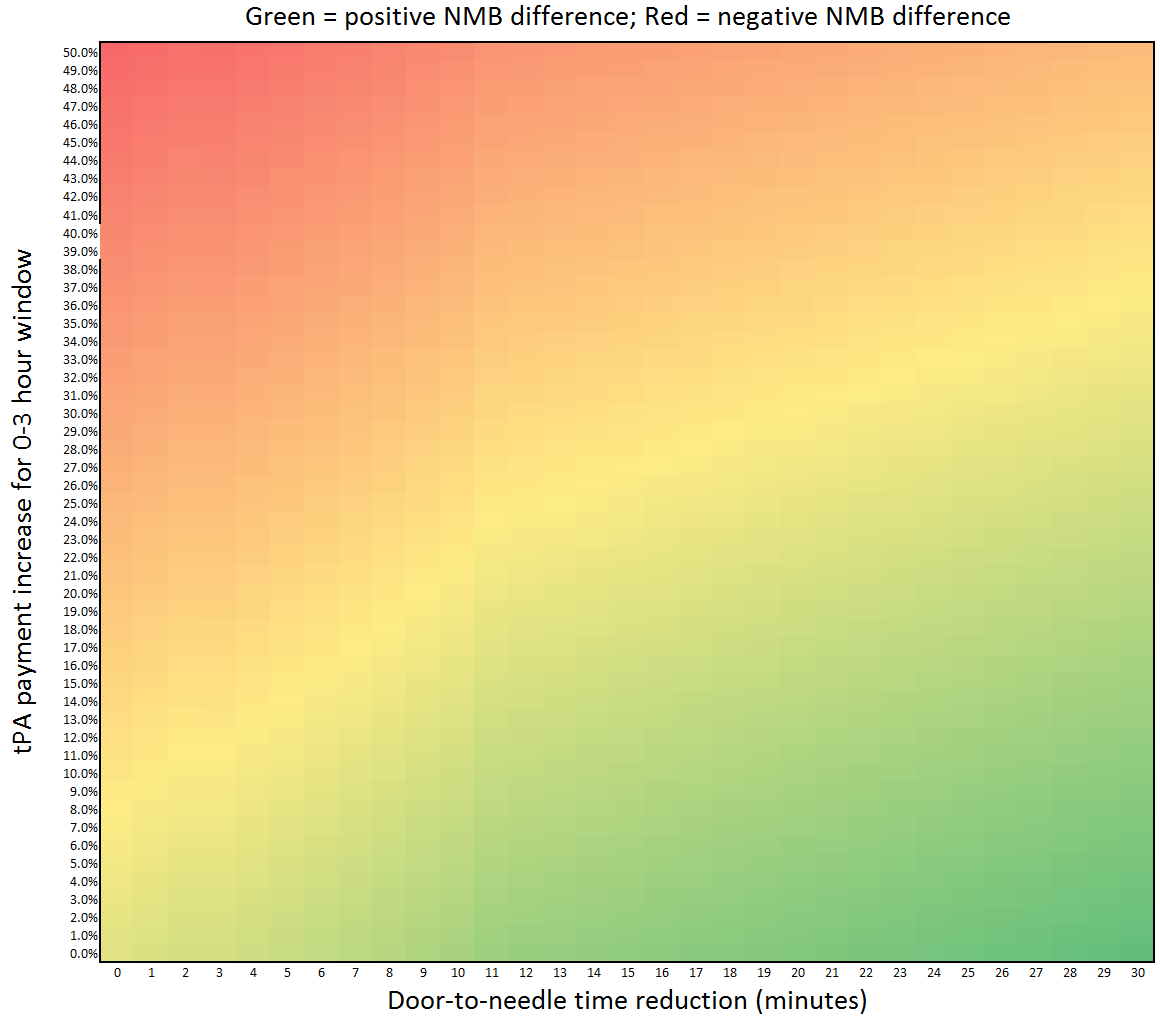 We assessed the potential for HIV elimination in the United States, i.e., decreasing the HIV reproduction number to less than 1, and we evaluated the most effective improvements in the HIV care continuum to achieve this goal.

We used the HIV Optimization and Prevention Economics (HOPE) compartmental model to estimate the HIV reproduction number in the United States from 2006 to 2015. In this model, we stratified the population by transmission group, race/ethnicity, age, circumcision status, and HIV risk level and the HIV-infected subpopulations by disease progression and continuum of care stage. Transition rates among the approximately 4,000 subpopulations were based on the literature, expert opinion, and model calibration methods, ensuring that this model closely reflected both demographics critical to the spread of HIV and HIV infection in the United States between 2006 and 2010.

We estimated the HIV control reproduction number, Rc, using the next generation matrix method (NGM). Rc is an estimate of the average number of secondary infections from an infected person in a completely susceptible population calculated under the additional assumption that the susceptible population may be taking steps to prevent HIV acquisition.

We conducted a sensitivity analysis to find the degree of change from a base-case Rc in 2015 that would occur by altering model transition rates associated with the HIV care continuum such as being diagnosed with HIV, linked to care, and achieving viral load suppression (VLS). 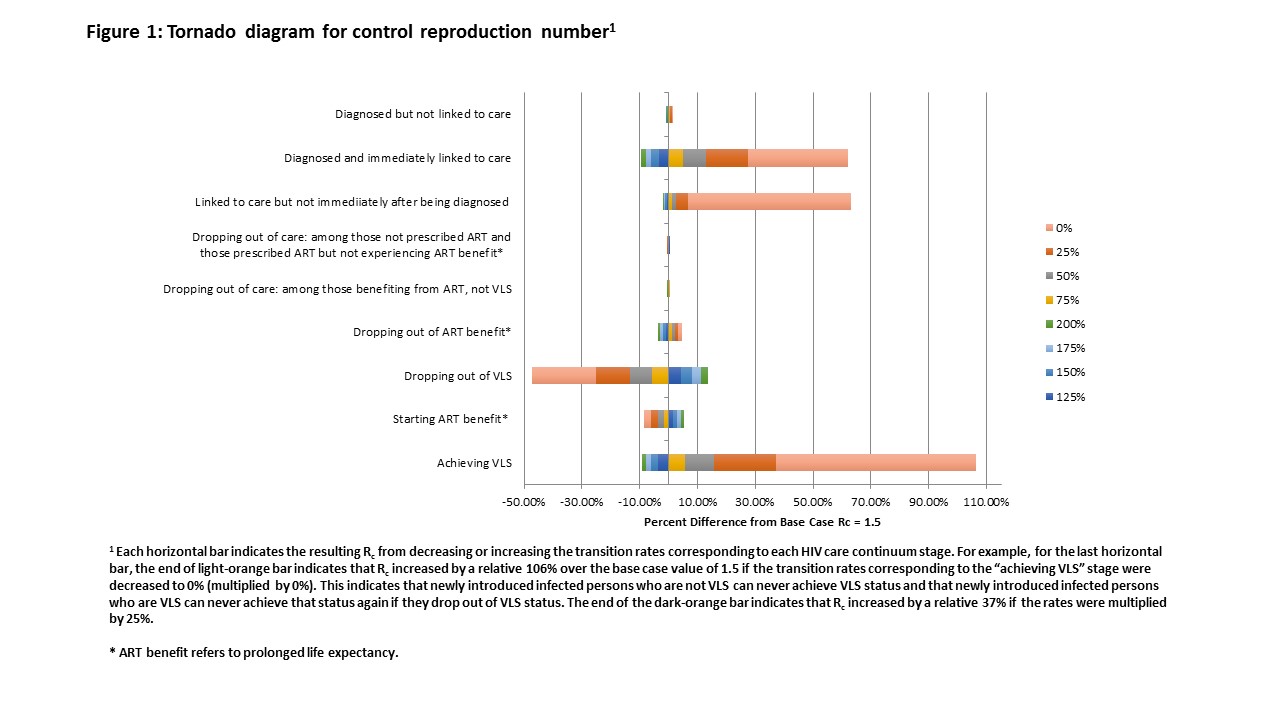 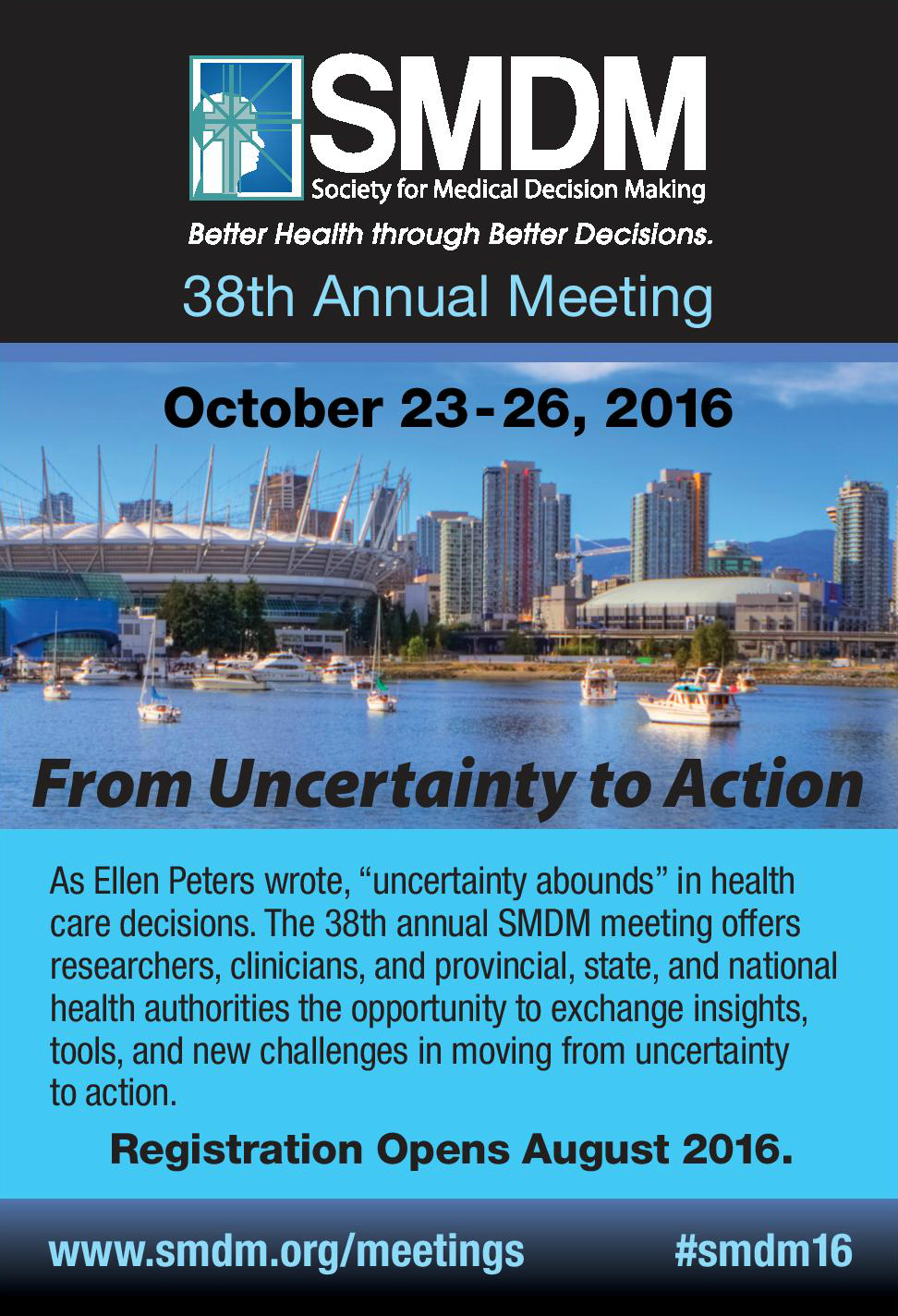