Purpose: To develop a model for progression of individuals with chronic gastroesophageal reflux disease (GERD) to Barrett's esophagus (BE) and esophageal adenocarcinoma (EAC).

Method: We developed a continuous-time dynamic microsimulation model to track a cohort of individuals 18 years old and over in Canada. Using census data, the model incorporated several risk factors of BE such as age, sex, ethnicity, smoking, and obesity. We distributed agents among census tracts in major Canadian cities. These model features made it possible to identify vulnerable populations in terms of access and delivery of screening, surveillance and treatment at specialized centers for BE and EAC. We modeled weekly reflux-associated episodes, which in conjunction with other factors determine risk of BE using the M-BERET prediction model. Pooled survival curves, which were based on a literature review, were fitted to the Weibull distribution to obtain time-to-event distributions for transitions through BE to EAC. Various screenings strategies were implemented including endoscopy (conventional and ultra-thin nasal), EsophaCap, EsophaCap + genetic testing (innovative strategy), and no screening. Treatment strategies considered were esophagectomy and endotherapy (radio-frequency ablation, photodynamic therapy). We followed the screening and surveillance guidelines of the Canadian Association of Gastroenterologists.

Result: The best-fit parameter values, which reduced the mean prediction error (MPE=10%) between observed and modeled EAC incidence (per 100,000), were 2% for the probability of a symptom episode being reflux related and 47.5% for the threshold above which the risk of BE based on M-BERET. The mean annual change in EAC incidence was 3% (data) and 8% (modeled). For model validation, we compared EAC incidence by age category, gender, and province of residence—all of which were not used during model calibration.

Conclusion: We calibrated and validated a model that will be used to evaluate the cost-effectiveness of an innovative screening and surveillance strategy. What sets our model apart is its ability to: 1) forecast EAC cases in space and time, 2) test early intervention strategies that target chronic GERD which is a significant risk factor for BE, and 3) determine the minimum test characteristics of a genetic test needed to deliver net health and economic benefit to Canadians. 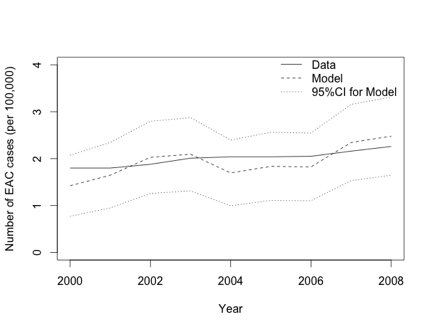 Figure 1. Observed and modeled incidence of esophageal adenocarcinoma (EAC) in Ontario from 2000-20008. Observed data was obtained from Cancer Care Ontario.

See more of: The 36th Annual Meeting of the Society for Medical Decision Making