BREAST CANCER PATIENTS' INVOLVEMENT IN ADJUVANT SYSTEMIC THERAPY DECISION-MAKING: THE LEVEL OF INVOLVEMENT DIFFERS DEPENDING ON WHO ASSESSES IT AND THE TYPE OF THERAPY

Purpose: Deciding about adjuvant hormonal and/or chemotherapy for breast cancer can be difficult. Many factors, medical as well as personal, need to be considered. Currently, there is no consensus about which instrument best captures patient involvement in decision-making, or whom (patient, doctor, observer) can best determine it. We used the Control Preferences Scale (CPS) to determine patients' preferred level of involvement in decision-making, the actual involvement they experienced, and their involvement as assessed by observers.

Method: We audiotaped and transcribed consultations with oncologists in which hormonal and/or chemotherapy was discussed. Based on these transcripts, two researchers independently assessed the patient's level of involvement using the CPS categories. Within three days after the consultation patients were interviewed by telephone and asked whom they felt had made the final treatment decision (open-ended question). Two other researchers independently coded the patient's answer using the CPS categories. In the patient questionnaire patients were asked to indicate their preferred role in decision-making using the CPS. All analyses were performed using SPSS 20.

Result: To date we have coded 34 consultations and telephone interviews and analyzed the questionnaire data for 77 patients. In January 2014 we can present data for at least these 77 patients. Their median age was 60 years (range, 37-81). Overall, 43% of patients reported preferring to share decisions, 30% preferred to decide for themselves and 27% preferred to defer decision-making to their oncologist. 47% of patients <50 years preferred to decide for themselves, whereas almost 50% of the patients >50 years preferred to share decisions. For both the hormonal and/or chemotherapy decisions, and contrary to the observers' assessment, patients more often reported that they had made the decision themselves (Figure 1). According to the observers, the oncologist made the final decision without any input from the patient in 65% of the hormonal therapy decisions, whilst patients were more frequently involved in the chemotherapy decision. 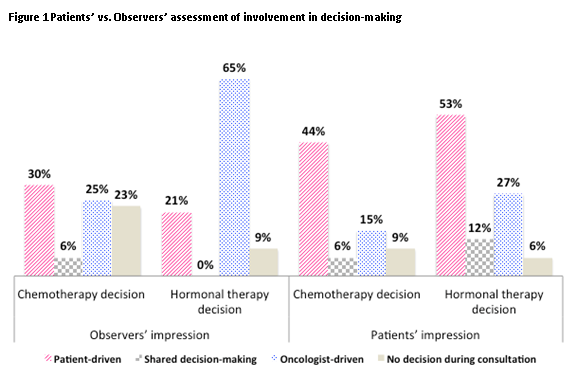